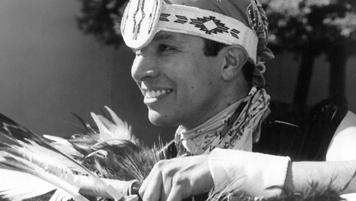 Sewam American Indian Dance was founded by Eddie Madril, an award winning dancer and educator.  Sewam Dance brings the music, arts and culture of Native American dance to audiences around the world. Specializing in the dances of United States Plains Indians, Sewam Dance has performed across the country and internationally, inspiring audiences and sharing the power and beauty of Native American people.

Eddie Madril is a member of the Pascua Yaqui tribe of Southern Arizona and Northern Sonora Mexico. He is an active member of the Native American community and a representative of his culture through various aspects: as a dancer, singer, teacher, playwright and filmmaker. For over twenty-five years, his involvement and commitment to Native heritage has provided him with the opportunity to share a wealth of information amongst diverse communities. His work has included the presentation of assemblies and residencies in Bay Area schools working with students and encouraging the development of appreciation and respect for American Indian dance, music, culture, history, art and sign language.
He was awarded a three-year recipient of the California Arts Council Artist-In-Residence grant, as well as the San Francisco Foundation individual artists' grant and a grant from the San Francisco Arts Council. He was nominated for the prestigious Isadora Duncan Dance Award as a soloist for his hoop dance presentation in his 2008 original play "SunDagger Solstice." In November 2011, he was recognized by KQED as an American Indian Bay Area Local Hero.
Eddie is currently a professor for American Indian Studies at San Francisco State University and is a monthly host for KPFA Radio's Bay Native Circle program.  He has presented as a guest lecturer across the country in American Indian music, dance, religion and contemporary culture for Tufts University, Stanford University, St. Mary's College, and Dominican University, among others. Additionally, he has had the honor of being an invited guest for Academic symposiums on a variety of Native American issues.
As a dancer and educator he regularly presents and performs throughout the western United States for such groups as the San Francisco Ethnic Dance Festival (performer and panelist), Young Audiences of Northern California and Youth in Arts. He has been an invited presenter for national organizations such as the ANCC National Magnet Conference (speaker), ONS National Advanced Practice Nursing Conference
(keynote speaker), and World Arts West's arts education program People Like Me.
For over ten years Eddie has been member of the Board of Directors for Friendship House of American Indians Inc. and currently acts as Vice President of the Board.  He has also been a member of the advisory committee at the de Young Museum of San Francisco for Native programming.
Awards and Nominations
2008 Isadora Duncan Dance Award Nomination - Outstanding Solo Performance - Hoop Dance
2011 KQED American Indian Bay Area Local Hero - Eddie Madril
2014 Isadora Duncan Dance Award Nomination - Outstanding Achievement in Visual Design - Sewam Dance Origins, Co-Director

Sara Moncada began her studies in dance and theatrical performance at the age of six including classical ballet and modern dance. In 2001, she discovered her passion for the art of Flamenco and began studying in the U.S. with La Monica and La Tania, among others. Her studies took her to Spain where she studied with such artists as Farruquito, La Farruca, Pastora Galvan, Andres Marin and Rafaela Carrasco. In 2003 she performed as a company member and soloist with Pasion Flamenca, and has been invited to dance with Carola Zertuche’s Theater Flamenco and Yaelisa’s Caminos Flamencos. In 2006, she joined La Tania Baile Flamenco and has worked as a company member and soloist for such events as Una Noche Flamenco, Punta y Tacon, Mision Flamenca and Arte de Luna, a monthly traditional flamenco show that she directs and produces.

For over 30 years she has performed and shared dance, culture and arts to communities everywhere.  In addition to her work with Sewam Dance, she is Co-Founder of Wise Women Circles a women owned and operated inspirational film/production company.